Working in Africa you were in competition with other forms of ‘medical practice’. There were witch doctors who sometimes caused us great difficulties. One case that I remember very clearly was a pregnant woman at term who presented in severe shock and bleeding heavily from a placenta praevia. After urgent resuscitation with IV saline as we waited for blood for transfusion her haemoglobin when checked was 3Gm/100mls, about 25% of normal. I have no idea of what her haemoglobin was before she started to bleed but suspect that it was low or she would have been dead. We were very short of blood and there was no blood bank in the area and, using the 2 units available, I quickly did a Caesarean. (She was nowhere nearly fully dilated.) The baby was dead. She survived.

As a first choice she had gone to the witch doctor who sacrificed a goat which she provided. He got the meat, she had to drink the blood to appease the evil spirit causing the problem! It hadn’t helped.

Then there were local healers. I have no doubt that they often did good. A high infant and maternal mortality in the country is a warning that a better system is necessary. But where I mostly met with their failure was in their treatment of fractures. Their major approach was to use external fixation with strips of bamboo tied together very tightly with string. They didn’t have Xrays; they didn’t understand the practice of fixing the joints above and below; they didn’t know how to assess the potential excessive tightness of their fixation with possible nerve, vascular and necrotic problems. They surprisingly didn’t seem to have learned that fractures swell in the early stage of the healing process. We have been ingrained with the 5P principle, watch for – Pain, Pallor, Pulses, Paraesthesia, Paralysis. They do not understand this. They didn’t understand early mobilisation. Therefore we faced initially necrosis with gangrene +/- infection. Then stumps where the limb had dropped off, contracted joints, extreme sepsis etc.

Amputations performed, because of infections, usually had to be of the guillotine type with refashioning when the situation was better controlled. Occasionally on examination of the amputated dead limb we could not find evidence of a fracture. I will show you a few as they presented.  Some of the pictures are a bit nasty. It was rare not to have one or more in the ward every week.

You can see that this boy has come when there is absolutely no hope to save the limb. Because of infection he had a guillotine amputation, and the end result was a very high amputation. There is no social security in the countryside. The boy below has come a stage later when the limb has already fallen off. We tried to get the swelling to settle as the remaining length of the limb is important.

The following child presenting very late would be able to have an initial definitive procedure not far above what was his elbow. Fortunately he was not badly infected.

In this boy we have a picture at a later period of treatment. 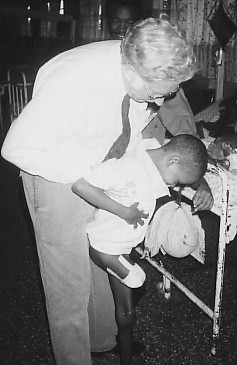 His right lower leg was dead when he arrived. He had been in bed a long time at home and came in with a fixed flexed position of his hips and he was emaciated. His leg has been formally amputated and is healing but his other leg was weak; we didn’t have a physiotherapist. Trying to get him an artificial limb later the flexed hip on his amputated side was going to have to be freed up by a lot of hard work by himself and those looking after him! So there was an extra job for the doctor, but we tried to make it a fun experience. The kids were remarkably cooperative: we got to have good times together, but the future was dismal for them.

The final boy was on his way to a life without a limb in a society where in the countryside for the poorer classes work is almost exclusively manual. We discharged them with the hope and prayer that they might find a successful niche in life.

Almost certainly if they had come early none of these limbs would have been lost.

This site uses Akismet to reduce spam. Learn how your comment data is processed.